Watch Anohana: The Flower We Saw That Day online free

Anohana: The Flower We Saw That Day

High school student Jinta is a hikikomori and lives in Chichibu, Saitama Prefecture, Japan. One summer day, when Jinta is absorbed in a video game, a girl suddenly appears in front of him. The girl is Jinta's childhood friend Meiko, but it seems impossible because Meiko died on a summer day. Meiko wears the same white dress when she died, but she looks a little taller. She tells Jinta that she has a wish and that's why she came back as a ghost, but Meiko can't remember what her wish was. To grant Meiko's wish, Jinta along with his friends Atsumu, Naruko, Chiriko, Tetsudo and Meiko gather together for the first time in 7 years. Jinta soon realizes that he is the only one able to see Meiko.

Watch Anohana: The Flower We Saw That Day Episode Full 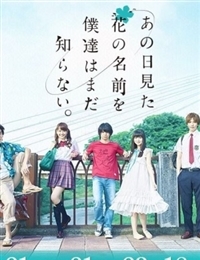