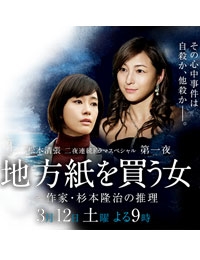 Masakazu Tamura was born 1 August 1943 in Kyoto, Japan to Japanese actor Tsumasaburō Bandō. His brothers Takahiro and Ryō are also actors. He was thus trained in fighting with swords and more traditional forms of Japanese theatre like Kabuki.
He made his debut in movies with the film "Eternal Woman" in 1961.
He has played the role of "Nemuri Kyoshirō" four times in made-for-TV specials.
He is most famous for his role as the polite and highly idiosyncratic police detective, Furuhata Ninzaburō, in a self-titled drama by Japanese playwright Kōki Mitani. This drama was one of the most popular in its time and one of the most popular dramas in the history of Japanese television. There are rumours that while the character was based on Matlock, the characteristics, speech patterns and easily imitable fashion sense are based on that of writer Koki Mitani's professor of philosophy, the famed scholar Yoichiro Murakami. Tamura himself afterwards mentioned that he regretted taking the role, because it ended up typecasting him. He also appeared in many staged dramas (jidaigeki).