This drama portrays the life of the 19th king of Goguryeo, Hwanwoong, who was sent from the heavens to make the world a better place. He falls in love with Saeoh and gives her the joojak necklace; however, Kajin becomes jealous since Saeoh has given birth to Hwanwoong's son. She takes the baby and throws him off a cliff. Saeoh, thinking that her son had died, is overcome with grief and turns into the black joojak to destroy the world. Hwanwoong is the only one who could stop her. Afterwards, Hwanwoong returns to the Heavens and prophecizes that 2000 years later, the true Joo Shin king will come to Earth. With the help of the four gods, he will rebuild Joo Shin. 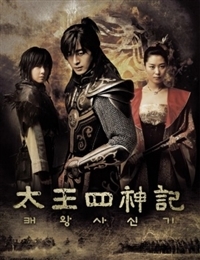