There have been two successive murder cases in Tokyo where the victims were drained of blood after they were strangled and their carotid artery punctured. Saeki Shoji and the other detectives of the precinct investigate the deaths as murders by a serial killer. At that moment, a man with a big suitcase Misugi Akira and a mysterious beauty Maria alight from a midnight bus. They visit Maejima Yasuo, the owner of a secondhand bookshop, and Misugi tells him that he has come for a female named Kaori. Maejima, who is an old friend, points out that Misugi has no reflection in the mirror and warns him not to lose focus. Misugi and Maria look no different from ordinary people, but the two of them actually have a secret. 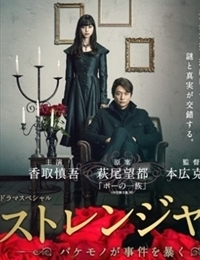