Junko comes to Korea as an exchange student to learn the language. Upon arrival, she goes to the guesthouse, with its friendly owner, delicious food, and her own private furnished room. There's nothing more she could ever want, until, to her horror, she finds out her room belongs to the owner's son, Jongman. Junko threatens to pack up her bags and leave, but Jongman's father begs her to stay, enticing her with a package deal of Jongman's room, complete with Korean language lessons from none other than Jongman himself! Jongman's father forces his son to give the lessons to Junko to make up for the debt he ran up on his credit card, and so begins the tug of war between the owner's son and the guest. 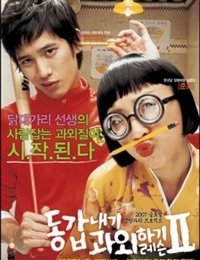