Two years after the end of LIAR GAME, Fukunaga receives an invitation to attend a new session of the game and his greed pushes him to accept the offer. He will then find an opponent he knows only too well in Yokoya. The two men will compete in a duel called Taboo Game, during which they will have four successive rounds to figure out a way to steal 100 million yen of their opponents money without breaking the taboo. 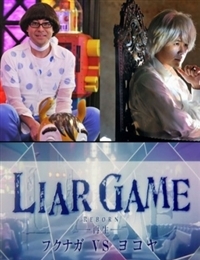