Based on the novel "Legend of Condor Hero" by Jin Yong, the story is set in the middle of Song Dynasty and at the beginning of the Nuzhen Invasion of China. Two dedicated Song Dynasty young men, Yang Tie Xin and Guo Xiao Tian find out that their wives are pregnant. They promise each other that when their children are born, they would become either sworn brothers or sworn sisters (if both are the same gender) or be married if they were of different genders. One night they befriend a Taoist priest named Qiu Chuji of Quan Zhen Sect who's wanted by Jin soldiers. Qiu Chuji dispatches soldiers coming to arrest him with ease and leaves when he sees a signal of his Sect appear in the night sky. Yang's kind hearted wife, Bao Xirou, rescues a wounded man who turns out to be the Jin prince Wanyan Honglie. When the Jin soldiers return, the two families are torn asunder. Wanyan Honglie takes Bao Xirou to the Jin capital while Guo Li Ping is taken by a greedy Jin soldier, Duan Tiande, to the Mongolian outskirts. Both women believe that their husbands perished trying to save them. Upon discovering his friends' demise, Qiu Chuji vows to find their children and teach them martial arts so that they can avenge the wrong done to their families. Hot on the trail of Duan Tiande, Qiu Chuji "befriends" The 7 Weirdos of Jiangnan. In exchange for helping Qiu Chuji find the two women, they make a friendly wager. Upon finding the children of Yang and Guo, each side will teach the child they find their martial arts. On the 18th birthday of the two children, they will all gather and have the two duel each other. The rest of the series depicts the trials and tribulations that the two sons underwent. Guo Jing, Guo Xiao Tian's son, grows up in Mongolia under the protection of Genghis Khan. Yang Kang, on the other hand, grows up as a prince in the Jin Empire. 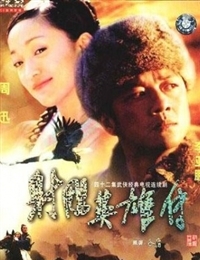 Watch The Romance of the Condor Heroes (2014) online free