Travelling around to practice medicine, Wu Myo Lie and her mother Wong Gi Gi successively encounter a man with a skin disease and someone from their hometown. Myo Lie falls in love with him at first sight and does everything she can to marry Him. Unfortunately, the boss of the vinegar brewery tries all possible means to prevent the marriage because of a grudge against Gi Gi. Having been cured of his disease, Ron helps Myo Lie achieve her wish. Myo Lie thought everything would settle down after the marriage, but unexpectedly, Him falls in love with his maid Eliza Sam. Myo Lie tries to disrupt them, but this causes Him and Eliza to accidentally have a relationship instead. Him takes Eliza as his second wife, arousing intense jealousy from Myo Lie, adding oil to the fire. Suddenly, a corpse is discovered. Gi Gi is accused of murdering her husband and sentenced to death. To protect the family reputation, Him's family demands that Myo Lie sever her relationship with her mother. At this time, Myo Lie finds out that she is pregnant, yet this begins a campaign to divorce her. 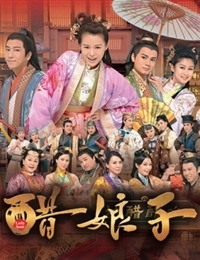