Other name: Kikujiro No Natsu

It's summer and 9 year old Masao (Yusuke Sekiguchi) has no one to play with. With soccer practice suspended and his friends away at the beach, living alone with his grandmother seems even less fun. By chance, Masao discovers the address and photo of the mother he has never met. But with little money and even less sense of direction, he needs help. A friend of his grandmother volunteers her husband, Kikujiro (Kitano Takeshi) to accompany the boy on his quest. Kikujiro hardly seems an ideal companion for anyone, let alone for a boy as sensitive as the sullen Masao. Brash, loudmouthed and always on the lookout for easy money, the irresponsible Kikujiro doesn't even appear to be overly fond of children. Ultimately, the two of them end up at a destination that neither of them could have imagined. 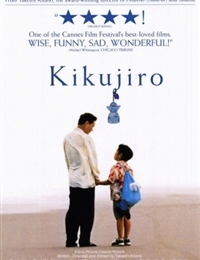