Other name: The Town Where Only I Am Missing, ERASED

Satoru Fujinuma is an unpopular manga artist, who doesn't like having relationships with other people, although he also works part-time delivering pizzas. Satoru has the special ability of "revival", that allows him to go back in time before terrible incidents occurred and right whatever wrong occurred. He goes back continually until the incidents are prevented. 18 years ago, a serial murder case took place with the victims being children. Satoru, using the body of an elementary school student, travels to that time to catch the killer and to save his mother who faced the criminal. 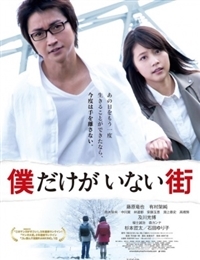