BIGBANG MADE: The Movie

Other name: BIGBANG10 THE MOVIE, BIGBANG MADE, BIG BANG MADE

In April 2015, Big Bang made a comeback after a three-year hiatus, and their Made World Tour ended with a great success drawing 1.5 million people. The movie follows Big Bang from the beginning till the end of their world tour in a documentary format to give up close and personal view of their 340 days journey on the tour as they perform in 32 cities in 13 countries. The movie will be a collection of the five singers off guard in their natural state having fun on-stage during the concerts, the behind-the-scenes videos of made concerts and albums, backstage and offstage. The film also included interviews with each member. 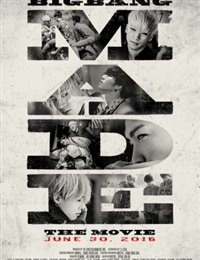