Set in the 1930's, an assassination plot, intended to take out a pro-Japanese group, takes place. Assassins and agents from the Korean interim government gather together. Sniper An Ok-Yoon is the leader of the assassin group. She takes on this mission due to her strong desire to see Korea's independence. Yeom Seok-Jin is an agent from the interim government. He plans out the assassination and gives orders to An Ok-Yoon's group. Hawaii Pistol is a contract killer within the group. 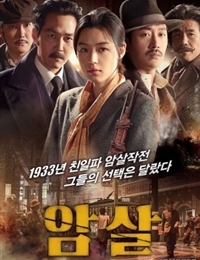