Other name: Alien Vs. Ninja

A band of ninja warriors, led by an Iga Ninja named Yamata, witness a giant fireball drop from the sky, crashing into the nearby forest. When the warriors search for the object, they discover aliens who captured and eat some of them. Yamata and the survivors swear vengeance. But when they counterattack the aliens, they learn that their weapons are useless. 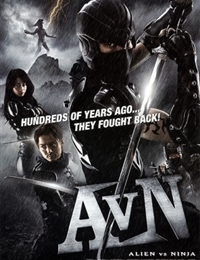