Other name: Ai Wo Utau Yori Ore Ni Oborero!, Be Crazy About Me

Student Mizuki Sakurazaka (Ito Ono) looks like a boy and is treated like a prince at her all female Seinoibara High School. She also leads the all girl rock band Burauerozen. They regularly perform at a venue that allows only women. Akira Shiraishi (Karam) is a student at the all male Kaizan High School. He's treated like a princess at his school because of his feminine face. Akira then sneaks in to watch Burauerozen. He confesses his love to Mizuki ... Note: Based on the manga series "Ai Ore!" by Mayu Shinjo (first published June 6, 2006 by Shogakukan). 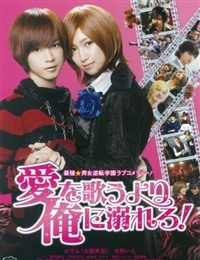