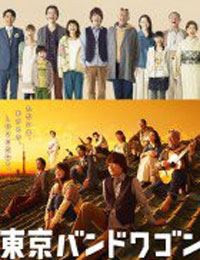 Koji Tamaki (玉置 浩二, Tamaki Kōji, born September 13, 1958) is a Japanese singer-songwriter, and actor. He has been well-known as a frontman of the band Anzen Chitai that debuted in 1982 and enjoyed their successful career particularly during the 1980s.
As a vocalist and a songwriter of the band, Tamaki spawned multiple successful compositions which were mostly co-written by lyricists including Goro Matsui and Yosui Inoue, by the time that the group suspended their career in 1993.
In 1987, Tamaki released the first solo single "All I Do", and continued his solo career after Anzen Chitai went into hiatus (1993-2001, 2004-2009). Throughout his solo career, he has released 23 singles and over a dozen of studio albums. His song "Den-En" released as a single in 1996 became a massive hit, which reached the number-two on the Japanese Oricon charts and sold in excess of 900,000 copies.
Tamaki has also been known as an actor who has appeared in seven feature films and numerous television dramas. He has started acting career for the first time on "Prussian Blue no Shozo", the 1986 motion picture he starred.
He has been married three times; the second wife was actress Hiroko Yakushimaru (divorced in 1998), and the third spouse was keyboardist Satoko Ando, who had formerly worked on his albums and live tours (divorced in 2007).
During Tamaki's first marriage, he had an extra-marital affair with actress Mariko Ishihara between 1983 and 1986. In her autobiography published in 2006, Ishihara confirmed her affair with Tamaki two decades ago. She also described episodes of severe domestic violence meted out to her by Tamaki, which Tamaki later admitted.
After Tamaki's retirement announcement due to health issues in 2008, Ishihara contacted Tamaki and the two began dating again. On February 25, 2009, Tamaki and Ishihara submitted their application for marriage in Tokyo. However, the application was not accepted and he split up with Ishihara after all. Anzen Chitai returned from a recess and released their new single "Aoi Bara/Wine Red no Kokoro (2010 version)" on March 3, 2010.